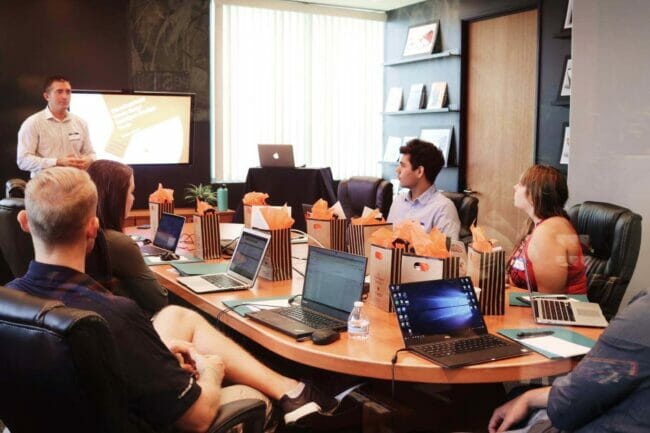 The main phases of the further development of the Forex in modern times were:

In accordance to the Bretton Woods Accord, the major trading currencies were pegged to the U.S. dollar in the sense that they were allowed to fluctuate only one percent on either side of that rate.

When a currency exceeded this range, marked by intervention points, the central bank in charge had to buy it or sell it, and thus bring it back into range. In turn, the U.S. dollar was pegged to gold at $35 per ounce. Thus, the U.S. dollar became the world's reserve currency.

The purpose of IMF is to consult with one another to maintain a stable system of buying and selling the currencies, so that payments in foreign money can take place between countries smoothly and timely.

The IMF lends money to members who have trouble meeting financial obligations to other members, on the condition that they undertake economic reforms to eliminate these difficulties for their own good and the good of the entire membership.

In total the main tasks of the IMF are:

To execute these goals the IMF uses such instruments as Reserve tranche which allows a member to draw on its own reserve asset quota at the time of payment,

Credit tranche drawings and stand-by arrangements are the standard form of IMF loans, the compensatory financing facility extends financial help to countries with temporary problems generated by reductions in export revenues, the buffer stock financing facility which is geared toward assisting the stocking up on primary commodities in order to ensure price stability in a specific commodity and the extended facility designed to assist members with financial problems in amounts or for periods exceeding the scope of the other facilities.

Since 1978 free-floating of currencies were officially mandated by the International Monetary Fund. That is the currency may be traded by anybody and its value is a function of the current supply and demand forces in the market, and there are no specific intervention points that have to be observed. Of course, the Federal Reserve Bank irregularly intervenes to change the value of the U.S. dollar, but no specific levels are ever imposed. Naturally, free-floating currencies are in the heaviest trading demand.

Free-floating is not the sine qua non condition for trading. Liquidity is also an indispensable condition. A tool for people and corporations to protect investments in times of economic or political instability is currency reserves for international transactions. Immediately after the World War II the reserve currency worldwide was the U.S. dollar.

Currently there are other reserve currencies: the euro and the Japanese yen. The portfolio of reserve currencies may change depending on specific international conditions, for instance it may include the Swiss franc.

The creation of the European Monetary Union was the result of a long and continuous series of post-World War II efforts aimed at creating closer economic cooperation among the capitalist European countries.

The European Community (EC) commission's officially stated goals were to improve the inter-European economic cooperation, create a regional area of monetary stability, and act as "a pole of stability in world currency markets." The first steps in this rebuilding were taken in 1950,

when the European Payment Union was instituted to facilitate the inter-European settlements of international trade transactions.

The purpose of the community was to promote inter-European trade in general, and to eliminate restrictions on the trade of coal and raw steel in particular. In 1957, the Treaty of Rome established the European Economic Community, with the same signatories as the European Coal and Steel Community.

The stated goal of the European Economic Community was to eliminate customs duties and any barriers against the transit of capital, services, and people among the member nations. The EC also started to raise common tariff barriers against outsiders.

The European Community consists of four executive and legislative bodies:

In 1963, the French-West German Treaty of Cooperation was signed. This pact was designed not only to end centuries of bellicose rivalry, but also to settle the postwar reconciliation between two major foes.

The treat stipulated that West Germany would lead economically through the cold war, and France, the former diplomatic powerhouse, would provide the political leadership. The premise of this treaty was obviously correct in an environment defined by a foreseeable long-term continuing cold war and a divided Germany. Later in this chapter, we discuss the implications for the modern era of this enormously expensive pact.

A conference of national leaders in 1969 set the objective of establishing a monetary union within the European Community. This goal was supposed to be implemented by 1980, when a common currency was planned to be used in Europe.

The reasons for the proposed common currency unit were to stimulate inter-European trade and to weld together the individual member economies in order to compete successfully with the economies of the United States and Japan. In 1978, the nine members of the European Community ratified a new plan for stability—the European Monetary System. The new system was practically established in 1979. Seven countries were then full members—West Germany,

France, the Netherlands, Belgium, Luxembourg, Denmark, and Ireland. Great Britain did not participate in all of the arrangements and Italy joined under special conditions. Greece joined in 1981, Spain and Portugal in 1986. Great Britain joined the Exchange Rate Mechanism in 1990.